The terrorist leader has his own private car, a Zhiguli. Owning a car in Russia during this period was quite rare. The following is what I found about Zhiguli cars:

Zhiguli cars were built in Togliatti, Russia, by a company called VAZ, also known as LADA in Western Europe. It was founded with the help of Italian car manufacturer Fiat. The first car that rolled off the production lines in 1970 was the VAZ 2101, a four door sedan whose design was based on the Fiat 124. The original Fiat design was adapted to work well in rugged countries with bad roads and harsh climates. The Zhiguli model had an even thicker body shell, tougher suspension, and a hand crank for starting the engine in-case the battery went dead in the unforgiving weather. The engine had a capacity of 1.2 liters and cranked out a whopping 64 bhp. The station wagon version (VAZ 2102) was also produced at the same time. It had the same characteristics of the sedan. The Western European versions of the cars were called the LADA 1200 and LADA 1200 combi (the station wagon).

Over the years the models were improved with different body styling and bigger more powerful engines but the production stopped in 1983. I found this picture of a more recent model, the VAZ 2107, on the “cars of the east” website by Kent Ekholm 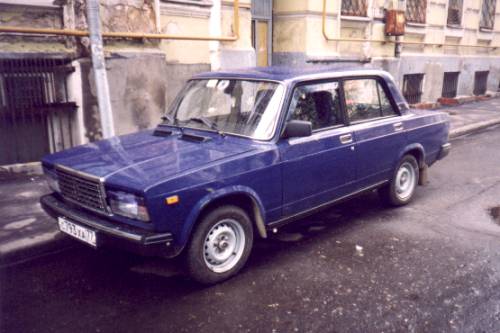 Besides the Zhiguli cars the company also produced an all terrain car, the Niva. This car was sold in Europe and Canada. It was not distributed in the USA because of the then on-going Cold War. The LADA models were available in Western Europe until the late 90’s, when stricter emission and safety rules were applied and more competition from Asian manufacturers came into the market.
I found this news story about a Zhiguli smashed by a bear, not sure what the driver did to upset the bear though.

One Response to Zhiguli Car

This site uses Akismet to reduce spam. Learn how your comment data is processed.